For men like Pahal Bhattrai, a former cow herder from Bhutan who now holds a graduate degree and lives and works in Australia – the Caritas network has offered new hope and stability.

In 1990, years of rising tensions in Bhutan erupted into violence between the government and "Lhotshampas" – Bhutanese residents of Nepali ethnicity. By late 1991, fear and persecution in the wake of the conflict forced Pahal out of Bhutan.

Living in the Timai refugee camp in Nepal presented a new world of challenges for Pahal, especially how to get an education and a chance at a future in a foreign country. At Timai, Pahal was offered an unexpected opportunity: the chance to enrol in one of the camp's schools. 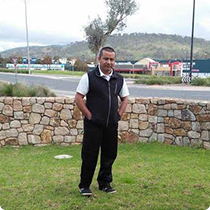 i
Pahal, a former cowherder from Bhutan, has changed his life through the support of the Caritas network and now lives in Australia. Photo: Caritas Australia

Pahal, a former cowherder from Bhutan, has changed his life through the support of the Caritas network and now lives in Australia. Photo: Caritas Australia

Pahal who was nineteen, studied with a group of nine and ten year olds. One of his teachers was an old schoolmate from his primary class in Bhutan.

"I felt shy," Pahal admits. "I was among children who were much smaller."

However, Pahal was intent on finishing his education, and funded by Caritas Nepal, he successfully passed his School Leaving Certificate in 1999, and went on to Higher Secondary School in Nepal again with financial support from Caritas.

Deciding that he wanted a formal teaching qualification, he applied for a scholarship offered by Caritas Nepal, which enabled him to complete a Bachelor's Degree in Education and paid work as a head teacher.

In 2011, Pahal was, at long last, allowed to leave Timai, his Nepalese refugee camp, for resettlement in Australia.

In Australia, the love of learning that Pahal had acquired in the Timai refugee camp didn't desert him. Starting out in a low-skilled job in a factory, he began taking short courses, which opened doors into new industries and new possibilities: first in security, later in care of the elderly and disabled.

He enjoys his work, and the culture in his new country. "In Australia, every employee is treated with equal respect."

With his earnings, Pahal has been able to buy a plot of land where he built a house: a place of his own at last, after more than twenty years in exile.

"All these achievements would not have been possible but for Caritas Nepal," he smiles. "I am ever grateful for the services given by Caritas Nepal to the Bhutanese refugees."