The Caritas network is assisting with the emergency response in Guatemala after a volcano erupted on Sunday, 3 June.

A state of disaster has been declared in the south central regions of Chimaltenango, Escuintla and Sacatepéquez, with a reported 75 deaths, over 200 people missing and thousands displaced. Homes, buildings and farms have been destroyed, with an estimated 1.7 million people affected by the emergency. The volcano eruption is considered to be the worst in four decades.

The local Church has opened shelters and a collection centre for affected families. Caritas Guatemala is there, working to evaluate and provide the necessary shelter, food, clothing and other basic items to those affected. 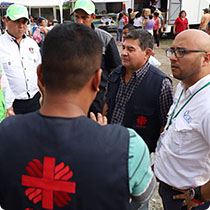 In a message, Pope Francis assured his closeness to the wounded and to those who are “working tirelessly to help the victims while asking the Lord to “bestow upon them all the gifts of solidarity, spiritual serenity and Christian hope”.

Caritas Australia is keeping the people of Guatemala in our prayers.