On Saturday 20 February 2016, Tropical Cyclone Winston struck Fiji. Thought to be the biggest to ever hit the Southern Hemisphere, the category five storm caused widespread devastation to communities.

A nationwide state of emergency was immediately declared by the Fijian Government; 44 people were killed and up to 350,000 (40% of the total population) affected. 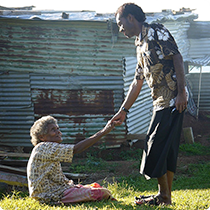 Caritas Australia and the wider Caritas Oceania network worked alongside the Catholic Archdiocese of Suva Disaster Relief Team, supporting communities in their recovery including the use of supplies that were pre-positioned in Vanuatu following 2015’s Cyclone Pam.

Our main focus was on shelter, immediate food and water, sanitation, psychosocial care and restoring food crops. To assist in ensuring food security and income sources, the Tutu Rural Training Centre replanted crops such as coconuts and taro, while the People’s Community Network (PCN) supported families sheltering in evacuation centres.

We will continue to support the Archdiocese to assist communities as they recover well into the future.

One of the worst affected villages was Naivoco in Tailevu, a province on Fiji’s largest island. A small community with a population of only 70 people, 16 out of the 22 houses were destroyed, the remaining six were damaged and the only building left standing was the church.

During the storm, the community sought refuge in the church and some hid in a nearby cave. When they emerged in the morning, they had lost everything – their belongings were either destroyed or had been blown away by the 325km/hour winds.

The community was devastated. Many knew the cyclone was coming but they never imagined the impact it would have.

Immediately after, the Archdiocese of Suva Disaster Relief Team visited communities to evaluate the damage and distributed buckets, jerry cans, kitchen sets and blankets, as well as shelter kits while the communities looked to rebuild their homes.

During one assessment, Petero from the Archdiocesan Disaster Response Committee met Anna Tawake, 73, from Naivoco.

When he asked her what she’d lost, she replied, “everything”. Anna’s house was destroyed and all household items had blown away, including her most important one, “my rosary,” she said.

Five months later, Petero met up with Anna and asked her if she’d found her rosary. She said she hadn’t. Only recently he’d been gifted one from Father Sulio who’d visited Rome and had it blessed by the Pope. In seeing Anna again, Petero, without a second thought, gave her the rosary.

Petero said that it often wasn’t the relief items that people appreciated, it was the sense of solidarity they showed to others. It was the willingness of the team to sit and listen to people as they grappled with devastation and loss. During the response phase, the Disaster Relief Team provided psychosocial support to over 600 affected community members.