Bringing Them Home, 20 years on

On the 20th Anniversary of the Bringing Them Home Report we encourage all Australians to make new efforts to engage with the challenging national history of the Stolen Generations, recognising that truth and justice are essential first steps towards reconciliation and healing.

Aboriginal and Torres Strait Islander peoples are advised that the following article may contain the names and images of people who have since passed away. 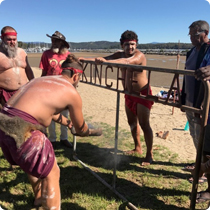 i
The smoking of Kinchela gate which was thought to be lost. Photo: Kinchela Boys Home Aboriginal Corporation.

The smoking of Kinchela gate which was thought to be lost. Photo: Kinchela Boys Home Aboriginal Corporation.

In 1997 Bringing them home: Report of the National Inquiry into the Separation of Aboriginal and Torres Strait Islander Children from Their Families was published.

The report raised public awareness, for the first time, about the experiences of generations of Aboriginal and Torres Strait Islander children who had been kidnapped by Australian Governments for the purpose of ‘assimilation’, to brainwash them into becoming domestic servants and labourers for white Australians.

“Well, the government thinks that we were taken because we were neglected. That’s what they say in my report. I’ve read my report right through and it’s all lies of course. Because I was taken care of by my family, by my Mum, by my Dad and we … I had the best life in all my life until I was taken away… We weren’t allowed to speak of any Aboriginal culture, language because I didn’t know it because I was taken away at an early age. And so I really lost just about everything. You know, I lost my family, I lost everything.” (Bill Simon, #33, Kinchela Boys Home Survivor)

These children have grown to be known as the Stolen Generations.

It was estimated that from 1910 to 1970, between one in three and one in ten Indigenous children were forcibly removed from their families, resulting in devastating effects for the children, their families and local communities still felt today (Source: Bringing them home)

In many of the Institutions where Aboriginal and Torres Strait Islander children were placed, their treatment was brutal and experiences of abuse were commonplace.

“They had this thing about when a boy got into strife, they’d line all 70 of us up and the boy had to walk the line. And every kid had to punch that kid hard enough to satisfy those people. Because if they didn’t they were threatened they would go down the line after him. And by the end of the line – by the time you got to the end of the line you were bruised and bleeding all over.” (Cecil Bowden, #29, Kinchela Boys Home Survivor)

Caritas Australia has been partnering with Kinchela Boys Home Aboriginal Corporation (KBHAC) since 2011. KBHAC was formed in 2001 by survivors of the notorious Kinchela Boys Home (KBH), a Government run institution for Aboriginal Boys near Kempsey, on the mid North Coast of NSW. The organisation encourages and supports a group healing model of care, which helps survivors address the legacy of physical, sexual, psychological and cultural abuse experienced by the KBH survivors as well as the intergenerational trauma experienced by their descendants.

Since 1997 there have been some significant steps towards truth-telling, justice and reconciliation including;

However, there is much more to be done.

Among other things, Stolen Generations survivors have been calling for more to be done to raise awareness of their history, for greater control over the historical sites and documents of importance to them, for support to establish Healing Centres and Museums under their direction, and for a National Compensation Scheme to ameliorate some of the ongoing effects of trauma for themselves and their families.

A resource for schools

As one contribution, Kinchela Boys Home Aboriginal Corporation and Caritas Australia have developed a teaching resource to support schools to teach about the experiences of KBH Survivors and to encourage students to take further steps to learn about the local history of the Stolen Generations in their areas.

On the 20th Anniversary of the Bringing Them Home Report we encourage all Australians to make new efforts to engage with the challenging national history of the Stolen Generations, recognising that truth and justice are essential first steps towards reconciliation and healing.

We also re-iterate the call of our Joint Statement on Subsidiarity to governments and all organisations concerned with the wellbeing of First Australians to commit to the principle of subsidiarity, including “ensuring Aboriginal and Torres Strait Islander peoples, including survivors of the Stolen Generations and their descendants, lead in developing and implementing policy that affects their lives…” and “committing to implementing the recommendations in the Bringing them Home Report and the Aboriginal Deaths in Custody Report.”