The Manide are an Indigenous minority who live in Camarines Norte, a province located in the Bicol Region of Luzon, Philippines. Though many young Manide now speak Tagalog, the main language of the Philippines, Manide elders speak their own, unique language.

Through a holistic development project which secures income, improves education and improves the access of Manide people to goods and services, Caritas Australia is empowering this unique Filipino community to create a better future for themselves. 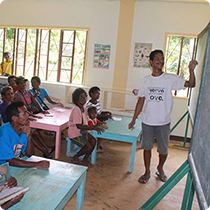 Ricky is a 23-year old Manide man, a husband and the father of young son. Ricky came across the Socio Pastoral Action Center Foundation of Daet (SPACFI) when he worked there as a teacher’s aide.

I have the courage to explain our issues to government officials, so that they will understand better.

Through the project Ricky has gained confidence and improved his sense of cultural pride and identity and this is having a ripple effect on his entire community and setting a positive example for other Manide youth.

“I can now speak to many people; I can express myself. I am not bothered anymore when I hear negative comments about Indigenous People (like us),” Ricky says.

“Instead I have the courage to explain our issues to them, so that they will understand better.”

The importance of education

In Manide culture, strong connections to family are fundamental, and so the traditional boundaries which define mainstream society, between school, work and home life, aren’t always relevant.

“Students are on and off in their school attendance, but most importantly, students continue their studies with their parent’s guidance,” Ricky says.

Ricky’s work ethic and familiarity with Manide culture, have seen him rise to the position of President of a local Indigenous Peoples’ Organisation. Now he supports community members to share their ideas and views during village level meetings and workshops. He visits and meets with local government officials and with other Indigenous Manide tribes to improve the quality of life for all.