Maasai culture in the modern era

On the border of Kenya and Tanzania live the Maasai tribes people. As one of the traditional hunting and pastoralist cultures of Eastern Africa they are known for their striking dress and unique customs.

Today, however, the Maasai are grappling with socioeconomic challenges and the difficulty of integrating traditional customs into modern life. Lositete, a village in northern Tanzania, is one area where severe drought has affected the livelihoods of villagers. In the rural communities of Tanzania, the responsibility of collecting water falls primarily on women and children, who are forced to travel long distances merely to find enough of it to survive. But since the implementation of this project, improved infrastructure has brought significant change to the people of Lositete including the Maasai. 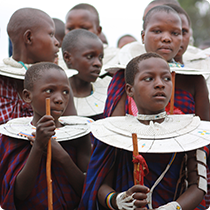 Through a Caritas Australia Water Supply Project, students have enough water to concentrate at school without disruption, and adults are able to concentrate on other income generating activities.

Program Coordinator Scott Martin spoke of the significant improvements that the program has brought to locals. “The Head Teacher at Lositete primary school noted that before there was water, teachers did not want to stay in the village. Since the project, however, the government has assisted the school to build three staff houses and staff retention has greatly improved,” Scott said.

“The improved school conditions and expansion of classrooms has also resulted in a 56% increase in students from 695 students in 2013, to 1082 students in 2017 as well as a marked improvement in school performance.”

“The school has even won two district awards, including for ‘Most Improved Primary School’ in 2013.” Through collaborative infrastructure building projects like these, Caritas Australia is proud to support a brighter future for the Maasai of northern Tanzania.