The impact of South Sudan's famine on Internally-Displaced Persons

Laimona is 40 years old and lives with her four children under a tarpaulin in a United Nations’ Internally-Displaced Persons (IDP) camp in the town of Wau in South Sudan.

“I’ve fled to this secured place with my four children but nobody wants to share a tent with me because I have epilepsy. If I get an attack, everyone is afraid of me. Therefore my children and I live here under this tarpaulin.”

The famine has hit them hard.

“We only have some onions and some flour left but in four days time, our food will be finished. I have no idea what to do then,” she says. 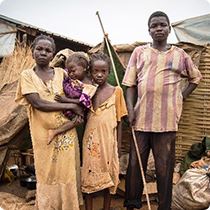 Bakhita is a 45-year old widow, at a United Nations’ Internally-Displaced Persons (IDP) camp in the town of Wau in South Sudan.

“We had a good life together my husband, me and our children. We were farmers and had plenty to eat. Everything was changed by the civil war. My husband was killed by armed men on January 1, 2016, while he was at work in the field. I fled with the children to Wau.”

“As a widow with seven children, life is tough. My two oldest daughters are married but my five sons are with me. The three youngest live with me in the Internally Displaced Persons (IDP) camp but for my sons, aged 16 and 18, I find it safer outside the camp. So they live in Wau with an uncle. I wish we were all together again in our own village. But it is still too dangerous to return.” 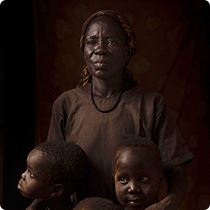 i
Bakhita Abol Akol and two of her children. Photo: Ilvy Njiokiktjien, Cordaid.

Bakhita and two of her children. Photo: Ilvy Njiokiktjien, Cordaid.

Donate to our Africa Emergency Appeal to support those affected by the East Africa food crisis.