Women unite for the world's most marginalised

In solidarity with women facing the challenging effects of poverty and in the month when Australia celebrates its mothers, over 500 women have come together to stand in solidarity with the world’s poor by attending our Women for the World events.

This year's events were held Canberra, Sydney and Melbourne and were organised by staff and volunteers of Caritas Australia.

View our gallery featuring photos from all three events.

This year Women for the World events raised approximately $60,000 in support of women facing poverty and injustice all over the world. This is the fourth year that Caritas has staged the event. 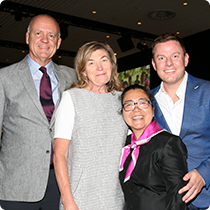 For one of the events main organisers, Michelle Fernon, Women for the World is a way that Australian woman can directly change the lives of other women whose socio-economic status has not afforded them the opportunities for work and success which many enjoy in Australia.

"Women make up more than half of the world’s poor. Many face systemic discrimination that prevents them from gaining an education, accessing healthcare and securing employment. Yet we know that when we help a woman, her family and her community also climb out of poverty," Ms Fernon said.

The aim is to make a real difference in the lives of youth and families for whom the effects of HIV and AIDS have been compounded by the impacts of living with poverty and disadvantage.

Sr. Leonor Montiel, also known as Sister Len, is the Director of the Maryknoll Seedling of Hope program, a program supported by funds raised during the Women for the World campaign. Sister Len has spoken on the crucial HIV and AIDS treatment work which the Seedling of Hope is offering women affected by stigma throughout Cambodia.

“Through Seedling of Hope people living with HIV and AIDS have a chance to live a new life with dignity, to improve their economic wellbeing and become independent, and transform their own lives,” Sister Len said.

“The aim is to make a real difference in the lives of youth and families for whom the effects of HIV and AIDS have been compounded by the impacts of living with poverty and disadvantage.”

The work of the Seedling of Hope program to counter widespread social stigma round HIV means Sister Len feels strongly about the inherent dignity which all people possess, irrespective of their social status.

“You are good…we veer away from it, but the seed within us is one of goodness. It is one of love,” Sister Len said.

Caritas Australia would like to thank all those who attended, made a donation, donated prizes to the auctions and our event sponsors CCI Personal Insurance for all of their support leading up to and during the events.