World Health Day (April 7) celebrates and acknowledges the importance of everybody having access to essential health services.

Since 2009, Caritas Australia has funded the Empowering People with Disabilities program. Run by the Sustainable Rural Development Centre (SRD) in Vietnam, thousands of people living with disabilities have accessed their vital services.

Here is a story from the program about Mai, a young girl from Vietnam, who has a disability. By having access to the right health services and support through the program, Mai has become stronger and more independent. 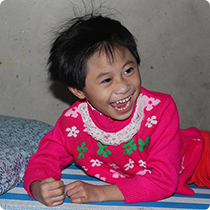 For the parents of six year old Mai, who has cerebral palsy, the Caritas Australia SRD partner program has granted new life-long possibilities and hope for the future.

Little Mai’s parents could only find work in a far off province, and were forced to give her to her grandmother for care. They hated being away, but had no other choice because of the demands of work.

Vietnam Programs Coordinator at Caritas Australia, Patrick Makenen, recently visited Mai and her family in Vietnam and spoke of their story.

“When Mai’s parents came home to visit, SRD heard their story and asked them to join the program. The training they received to raise livestock as a stable income has given them hope that they can now stay together and this has changed their lives,” Mr Makenen said.

Young Mai has also become stronger and more independent through the SRD program.

“Doctors have taught her parents’ home-based physiotherapy methods which over time has relaxed her muscles enough to be able to move,” Mr Makenen said.

“Before she could not lift her head and was completely bed-ridden but now she can move her hands and feet, sit up and even crawl!”

However it’s the sense of hope that the program has inspired, which has changed things more than anything for Mai and her parents.

“Through the “Club for People with Disabilities”, they’ve met other parents in the same situation to share experiences and learn from them. They are no longer alone,” Mr Makenen said.

“So much has changed for them in such a short period of time. For all of this, and for the support of Caritas Australia, they are very grateful.”