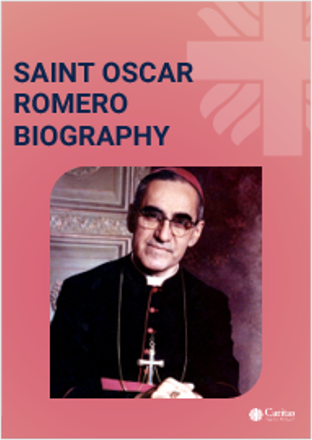 Oscar Romero was born into a large family on August 15, 1917 in El Salvador. Although they had more money than many of their neighbours, Oscar’s family had neither electricity nor running water in their small home, and the children slept on the floor.

Oscar’s parents could not afford to send him to school after the age of twelve, so he went to work as an apprentice carpenter. He quickly showed great skills, but Oscar was already determined to become a priest. He entered the seminary at the age of fourteen and was ordained a priest when he was 25 in 1942.

Recognising the power of radio to reach the people, he convinced five radio stations to broadcast his Sunday sermons to peasant farmers who believed they were unwelcome in the churches.

In 1970, he became Auxiliary Bishop in San Salvador. In 1974 he became Bishop of Santiago de Maria. At this time, Oscar Romero was described as a conservative, not wanting to break from tradition. He supported the hierarchy who encouraged conformity. He was uncomfortable with social action that challenged political leaders.

During his two years as Bishop of Santiago de Maria, Romero was horrified to find that children were dying because their parents could not pay for simple medicines. He began using the resources of the diocese and his own personal resources to help people living in poverty, but he knew that simple charity was not enough. He wrote in his diary that people who are poor should not just receive handouts from the Church or the government but participate in changing their lives for the future.

In 1977, Romero became Archbishop of San Salvador, the capital city. The situation in El Salvador was becoming worse and he couldn’t remain silent any longer. The military were killing the Salvadorian people - especially those demanding justice such as teachers, nuns and priests – including Romero’s good friend, Fr Rutilio Grande. Thousands of people began to go missing. Romero demanded that the President of El Salvador thoroughly investigate the killings, but he failed to do so.

Voice of the Voiceless

In his actions and words, Romero demanded a peace that could only be found by ensuring people had access to basic needs and their rights upheld. He raised awareness globally about the people in his country who had been killed or "disappeared". When he visited the Vatican in 1979, Oscar Romero presented the Pope with seven detailed reports of murder, torture, and kidnapping throughout El Salvador.

In 1979, the number of people being killed rose to more than 3000 per month. Oscar Romero had nothing left to offer his people except faith and hope. He continued to use the radio broadcast of his Sunday sermons to tell people what was happening throughout the country, to talk about the role of the Church and to offer his listeners hope that they would not suffer and die in vain.

On March 23, 1980, after reporting the previous week’s deaths and disappearances, Oscar Romero began to speak directly to soldiers and policemen: “I beg you, I implore you, I order you... in the name of God, stop the repression!”  The following evening, while saying Mass in the chapel of Divine Providence Hospital, Archbishop Oscar Romero was shot by a paid assassin.

Only moments before his death, Romero spoke these prophetic words: “Those who surrender to the service of the poor through love of Christ will live like the grain of wheat that dies… The harvest comes because of the grain that dies.” Like many great leaders who have fought for truth, Oscar Romero was killed and became a martyr, but his voice could not be silenced. He is a symbol of hope in a country that has suffered poverty, injustice and violence.

In May 2015, Oscar Romero was beatified in San Salvadore, with approximately 250,000 people attending the ceremony. After the Vatican's Congregation for the Causes of Saints declared that a miracle had occurred with the intercession of Oscar Romero, he was then canonised as a Saint by Pope Francis on October 14 2018.

His dedication to social justice and Catholic social teaching, particularly the preferential option of the poor, has since earned him the title of Patron Saint of Caritas Internationalis.

Oscar Ranulfo Romero is born into a family of ten on 15  August 1917 in Ciudad Barrios, El Salvador. His father is a postman and sometimes the young Romero helps his father post letters.

Oscar learns to be a carpenter, making tables, chairs and doors.

He goes to junior seminary when he is 14 years old.

When his mother is ill and they need money for medicine, Oscar leaves the seminary for three months and works in the gold mine in Potosi. He earns about 8c a day.

Oscar goes to Rome to study theology and stays there during World War II.His father and brother

die while he is in Rome.

He is ordained a priest on 4 April 1942.
He returns home in 1944 and celebrates his first Mass in Ciudad Barrios with his remaining family

For 20 years he is Director of the San Miguel Diocese. His mother lives there with him. She dies in 1961.

He becomes famous for his sermons.

He also does a lot of parish work like visiting prisons, organising catechism classes and working with the Catholic agency, Caritas, to provide food to the poor.

He is made a Monsignor and moves to San Salvador. There he meets Fr. Rutilio Grande who becomes a good friend.

He is made a Bishop on 21 June and invites El Salvador’s president to the ceremony.

People are angry that he seems to be supporting a government that is oppressing the people.

A month after he becomes Bishop of Santiago de Maria, the army kill three people in the village of Tres Calles. He comforts the families and writes to President Molina to protest about the murders.

In 1975 he writes a memo criticising some priests for being too political.  He also says that the way to solve El Salvador’s problems is to work with the government.

In February 1977 he becomes Archbishop of San Salvador.

Some people in the Church and some rich people are happy because they think he will stop the priests from helping the poor.

On 12 March 1977, Fr. Rutilio Grande and two people he is traveling with are shot and killed. Romero cancels all Masses the following Sunday except for one in front of the cathedral for 100,000 people. He refuses to attend any official government events until the murder is solved.

Despite receiving death threats, Mons. Romero denounces the government and the army for their repressive policies:

On 24 March 1980 a shot kills Romero as he says Mass. Thousands come to his funeral. The army fires into the crowd. Thirty people die and hundreds are injured.

Romero lives on in his people.

On 15 March 2009 Mauricio Funes is elected president of El Salvador.

He announces that his government will be inspired by Romero and the “option for the poor” (considering the poorest and most vulnerable first).

On February 3rd 2015, Pope Francis declared Oscar Romero a Martyr, and on May 25th he was beatified as the first step towards sainthood.

The Vatican's Congregation for the Causes of Saints declared that a miracle had occurred with the intercession of Oscar Romero. Later in the year, he was Canonised as a Saint by Pope Francis on October 14th.