While the Australian Infrastructure Financing Facility will address key Pacific infrastructure needs, other priorities like climate change financing and local aid are really what Pacific Islanders are calling for.

“As a former Australian High Commissioner to Samoa, I am aware that the highest policy priority presented by the Pacific’s political and Church leaders has been for Australia to demonstrate leadership in its own climate policy, particularly on national emissions and to commit a reasonable share on climate finance. The latest announcement continues to ignore that regional priority”, said Paul O’Callaghan, CEO of Caritas Australia.

“Our Pacific partners from Kiribati to Fiji are the worst effected, while having contributed the least to global warming. They look to Australia to take real action on reducing emissions, so that the region’s future is secure.

“Prime Minister Morrison is right to point to the need for improved infrastructure in the Pacific. It’s a real need and Australia is well placed to contribute well in this area over the coming decade. There are various ways to finance such development”.

“Also, basing Australia’s new pivot to the region on a concessional loan model which was rejected by previous Australian governments because that model was found to cause debt traps for the most vulnerable countries is not an ideal policy approach.”

Australia released today the State of the Environment for Oceania 2018 Report, Waters of life, Oceans of Mercy, contains dozens of first-person accounts and stories relating to the impact of climate change on communities from Papua New Guinea and Kiribati to Tonga, Samoa and the Carteret Islands.

All are calling on the Australian government to take urgent climate action and provide localised aid. Small-scale renewable energy projects on Taveuni island, Fiji have provided both clean drinking water and reliable electricity supply through a mix of hydro and solar power.

Mr O’Callaghan said many in the Pacific who Caritas works with have been disheartened to hear the Prime Minister announce that Australia will not be contributing more to the Green Climate Fund to assist our neighbours to adapt to the unavoidable impacts of climate change.” 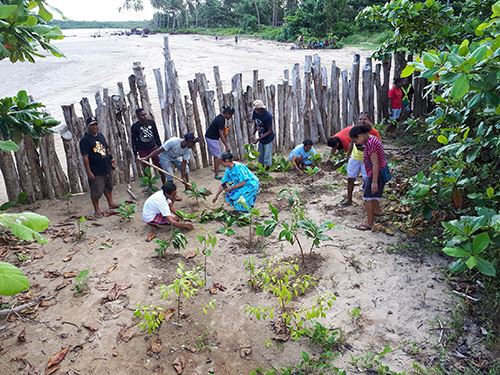